Promote and serve as an advocate for our community and businesses 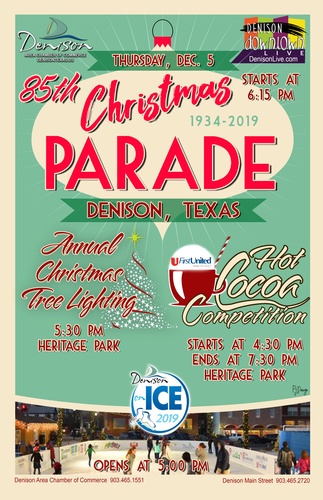 Event Description:
This year marks the 85th year for the Denison Christmas Parade.
For a $500.00 sponsorship, your business would be highlighted at the start of the parade on a banner and also recognized as a prize sponsor when prizes are announced.

The first parade took place on Friday, December 7th, 1934 on Main Street in Downtown Denison and was planned and hosted by the Denison Chamber. The parade was divided into seven sections, each section led by it’s own brass band and captain. It was billed as a mammoth gala parade ushering in the Christmas holidays. Bands came from Dallas, Sherman and other towns to help celebrate the Christmas season. Harry Weingarten was in charge of the more than 50 floats. Prior to the parade, the bands would march down each section of Main Street playing Christmas songs to get people in the spirit of Christmas. Store fronts left their lights on, adding to the lively activities of the evening. The Katy Drum and Bugle corps played on Main Street after the parade was over. J.L. Kraft, President of the Kraft Corporation was Master of Ceremonies as Kraft had purchased the Phenix cheese factory and had invested over $100,000 in the facility to produce mayonnaise and Kraft Processed Cheese. The poultry industry in Denison exploded with the anticipation of Kraft using 8,000,000 eggs a year with an estimated $2,000,000 value to the poultry industry. Events of interest for 1934: • Bonnie and Clyde were killed in May. • Babe Ruth was playing baseball • The New York Giants beat Chicago Bears for the National Title • Roosevelt was broadcasting “Fireside Chats” on the radio • The Great Depression was at an all-time low • George Gershwin was highly popular as was Jean Harlow and Shirley Temple • Hitler had just been “voted” leader of the Third Reich The number one Christmas song was Guy Lombardo’s version of “Winter Wonderland.” In keeping with that spirit, the theme of the 85th Annual Christmas Parade is “Winter Wonderland, A Christmas Celebration.”
Event Sponsors:
Location:
LIne up begins at 5PM on Crawford Street.  The parade route begins at Crawford and Armstrong, North to Chestnut, West to Scullin, North to Main, East to Rusk and South to Crawford - Entries that need to unload people should return to lineup position to unload.
Date/Time Information:
Thursday, December 5th
Lineup 5 PM
Parade 6 M
Contact Information:
Send an Email
Set a Reminder:
Business Directory Events Hot Deals Member To Member Deals Job Postings Contact Us Weather Join The Chamber